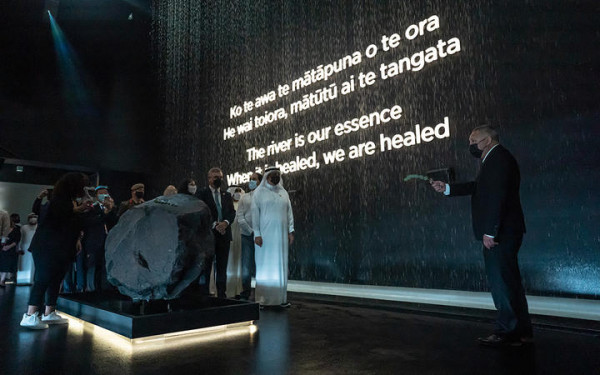 When Jasmax, the architects behind New Zealand's pavilion at Expo 2020 Dubai, suggested its theme be about the world-first decision to declare the Whanganui River to have the same rights as a human being, officials thought it would stand out on the world stage.

Gerrard Albert knew the story would resonate internationally when he was approached to help. He has long history with the concept – more than 20 years working on environmental and resource management issues for Whanganui iwi and the river; he negotiated the Te Awa framework with the Crown, he was founding chair of Ngā Tāngata Tiaki o Whanganui, the post-settlement governance body for the river and iwi; and he would become project lead for the iwi for Expo 2020 in Dubai.

It was an ambitious brief. The Aotearoa New Zealand Pavilion was designed to be an immersive experience that conveyed 'Care for People and Place', based on kaitiakitanga, the Māori ethos of connection to the natural environment.

Using innovative architecture and design, the building's Kaynemaile facade moved in time with low-frequency sound to create a rippling pulse. Visitors could embrace a sense of their own connection with the natural world as they experienced Kiwi innovations in many fields.

Albert recalls: "When we were first approached about this project, one thing that occurred to us is that it's on the statute books as part of this country's law, one that includes indigenous people. Part of the definition of the river provides for the iwi's mana, recognised as part of recognising the river's mana. So the indigenous part of this was always part of the story.

"While people focus on the legal personhood status, it exists to support a set of indigenous values being applied to the governance and management of a river. That's a paradigm shift of huge significance.

"Of course, we're still working through it at home here and I think, to be honest, NZTE did think at first it was more about the novelty rather than the actual thrust of this being an indigenous framework. Because it is a new and relatively unusual approach, most people see the novelty factor only until it is explained in more depth. That is why NZTE and the iwi agreed to do justice to the how the story is/was told in Dubai."

For Albert, there had to be ground rules: "We said to them: 'If you're going to use it, we'll have to work alongside you, and you'll have to treat it in the way in which it needs to be treated and emphasise the fact that it's an indigenous framework shared with the nation and one that will essentially be a good message for the rest of the world'."

He applauds NZTE for understanding that. "The steering group and all the project partners all went on that journey with us."

That was a start, but how could they translate a quintessentially New Zealand story into a concept international audiences could understand – and which NZTE could employ as a way into a wider story about a modern nation, its people and values?

Albert believes the project succeeded because it tapped into a universal theme: "The pavilion stood out because it's telling a story other people can see themselves in. Rather than just 'I am the river,' it's asking people to relate to the New Zealand story through their own context."

But, he insists, it is a continuing story. "One thing I'm keen for people to understand is that the story we told in Dubai is one that speaks not of where we're at, but where we're going. It's very much, 'We're not there yet but we're on the journey'.

"There was a need to tell the story of the river that was real. We have a short film in which you can hear noises of conflict, you can see the creation of the Tongariro Power Scheme, voices of protest, pictures of our people protesting, debating, and then leading to the new status of the river.

"It's conflict that's led to some resolution. Again, that gives hope and inspires not only international audiences."

"However, as the iwi, we hope New Zealand sees we still have a long way to go - but we have opportunity, we have avenues in which we can provide for better recognition of people's place and relationship with natural resources."

Paradoxically, Albert thinks the story of the river legally known as Te Awa Tupua made more of an impact on the world stage than in Aotearoa: "I think there will be a rather muted response to New Zealand's presence in Dubai because it has been seen through the eyes of a country struggling to deal with the effects of lockdowns and restrictions.

"I don't think people really understood what was done with Te Awa Tupua because it is based on a longer term understanding of what it means. It's a paradigm shift and we're not going to instantly recognise what value it can bring.

"The world has understood the message at Expo; now it's up to us at home."

This story was provided by New Zealand Trade and Enterprise and featured in The Herald on April 4, 2022.